On Sunday, February 28, 2021, Pastor Ronald (Ron) West, Jr. of Helenville, WI, loving husband to Jean and father of three, passed away at the age of 62.  Ron, diagnosed in 2012 with stage IV Non-Hodgkins Lymphoma, by God’s grace survived another nine years, but passed due to complications from a recent surgery.

Ron was born on August 19, 1958, to Connie and Ronald West, Sr., in Auburn, NY.  While attending college at New Tribes Bible Institute, Ron met Jean Van Ryzin, and the two were wed in 1978.  He is survived by his wife Jean, their three children, Holly (Jon) Blankenship, Joel (Erin) West, and Eric West, their five grandchildren, his parents, Connie and Ronald, Sr., and his sister Denise (Jeff) Ellis and brother-in-law Kirby Huseby.  Ron was preceded in death by his sister, Deborah Huseby.

Ron oversaw the Print Shop located at Elmbrook Church, in Waukesha, for nearly thirty years before accepting the pastorate at Grace Bible Church in Oconomowoc, where he faithfully served for the past four years.

Ron recognized his need for a Savior at 10 years old, understanding that there was no way for him to be right with God by his own efforts.  God, by His grace and mercy, providentially called Ron to put his faith in Jesus Christ and in His death and resurrection for the payment of his sins.  Ron grew in his love for Christ as he walked with Him and served Him throughout his life, sharing the good news of the great hope that he had with those that God saw fit to bring into his life.

“For by grace you have been saved through faith; and that not of yourselves, it is the gift of God; not as a result of works, so that no one may boast.”  Ephesians 2:8-9

“My flesh and my heart may fail, but God is the strength of my heart and my portion forever.”  Psalm 73:26.

Ron had a love for the Lord Jesus Christ and desired everyone to know Jesus too.  He knew that apart from putting his faith in Jesus’ work on the cross and resurrection, he could never enter into heaven.  In John 14:6, Jesus said, “I am the Way, the Truth, and the Life; no one comes to the Father but by Me.” 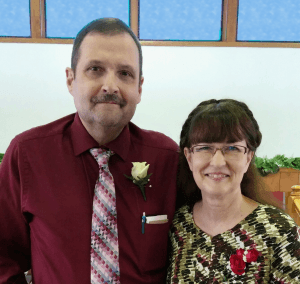 As the pastor of Grace Bible Church in Oconomowoc, Wisconsin. I believe it is important to share how I came to know Christ as my Savior. I was 10 years old when my mom and dad took  my sisters and me to hear an evangelist speak in our town. This was my first encounter with the gospel. As he preached I knew that I was a sinner and that I did not want to spend eternity in hell. I went forward that night and asked Christ to forgive my sin and come into my life.

When I was 15 years old my folks took us out of public school and put us into a Christian school. When I graduated, my dad insisted that I attend at least one year of Christian college. I chose New Tribes Bible Institute in Waukesha, Wisconsin. It was two years of intense Bible classes. While there I met Jean, a classmate, who would become my wife in 1978 after graduation. We have raised three children and have five grandchildren.

Over the years I have been involved in various church ministries. These have included youth group, college-age ministry, adult Sunday school teacher, men’s Bible studies, deacon and elder.

For 24 years Jean and I were members of Calvary Baptist Church in Jefferson,Wisconsin. For the past 12 years we have been members serving at Grace Bible Church.

In 2011 I was diagnosed with stage III hodgkins lymphoma then in 2012 it spread to stage four non-hodgkins lymphoma and was in my bone marrow. I survived a stem cell transplant and am cancer free today! Praise the Lord!

The day the Lord allowed me to have cancer was a turning point for me spiritually. I told the Lord that I would do whatever he showed me to do! I wanted my cancer to count for Him. I did not want to waste it. My life was in His hands. Since that time, I’ve had many opportunities to share my journey through cancer. Each time I shared my story I became more convinced that the Lord wanted me to preach in some capacity. As I prayed, it seemed that the Lord was leading me to be a chaplain, but God had other plans. Our pastor at Grace Bible Church was having some medical issues so I came alongside to encourage him in any way I could. This included helping with visitation, performing funerals, preaching and teaching Sunday school. When he retired in June 2016, the church board asked me to consider being the pastor at GBC. After much prayer, I was at peace suggesting that I be an interim pastor. The church membership voted me in as interim pastor in June 2016. Then in February 2017 I was voted from interim pastor to be full-time pastor of GBC.

I’m excited to be serving the Lord at GBC. I believe the Lord wants me here and with his help and guidance, I will trust Him to help me be the shepherd GBC needs.

My burden is that Christians have the desire to grow spiritually. That they would be excited about God’s Word and want to live for Him. I am concerned about the changes in our churches of today, straying away from sound doctrine. The New Testament gives us clear guidelines to live a fulfilling Christian life. It is not my intent to become a church that entertains. There is no value in that. We need to work together in love to be a Christ-centered people, firmly grounded in the Bible, glorifying God in our daily lives.

To God be the Glory

“My Story” Part One: